We are standing in the middle of a broad, long beach. The water is as flat as the beach and beyond, sky; shades of the same color. Ground, water, sky; it all blends together. 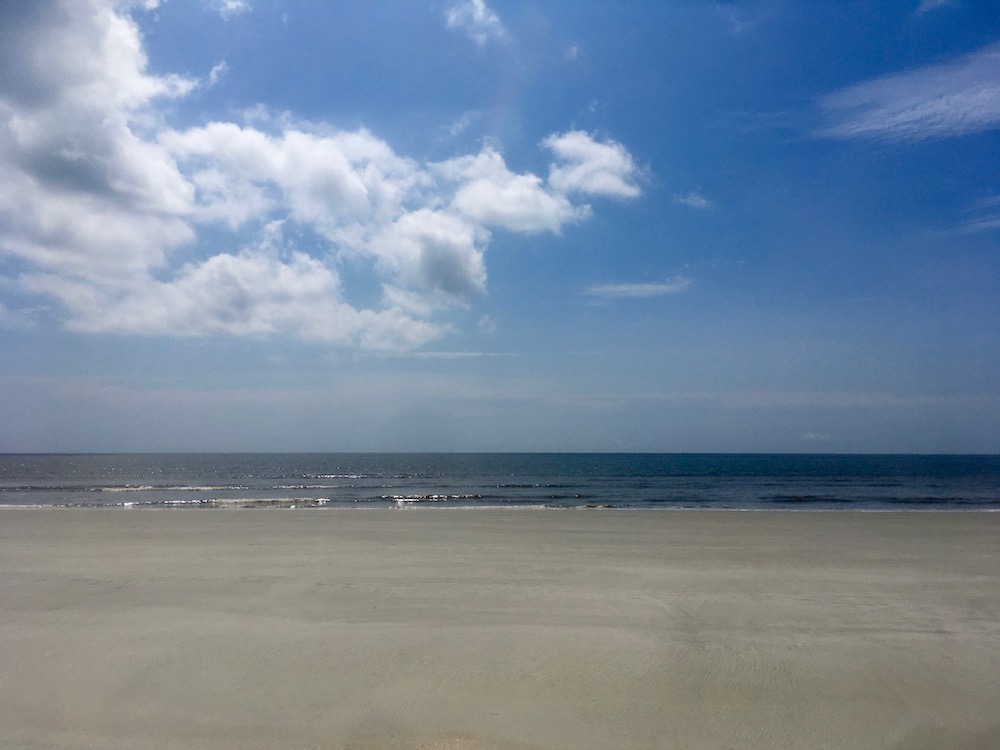 My twelve-year old daughter is staring up, her neck cranked upwards.

“It’s so,” she says, pausing for a moment to consider the best word, “big.” The wind tousles our hair like a dad walking by. My daughter looks at me, amazement flaring in her eyes. “We are so small,” she says.

I nod. I smile back. I agree. She is having the best kind of epiphany: the obvious kind.

I grew up far from any ocean beaches, but as a Canadian the feeling of being small is familiar. I spent months of every summer vacation camping in the shadow of the towering, ancient Rocky Mountains. When you encounter something big and old one is reminded in every moment of our newness and smallness.

But here on this white sand, it’s a different kind of feeling small than in the mountains. In the mountains, I am dwarfed, all the time. It is quiet in the Mountains, quieter than other places because unless you are at a rushing river or a waterfall, or the wind is strong enough to push the trees, the higher air pressure dampens all sound. It’s like wearing earmuffs. Everything is subdued. Noise drops off. And anything smaller than you is only barely smaller than you when compared to the size of the mountains. You are part of everything because you are small, all of it in the shadow.

But here on Sapelo, there are many things that are smaller than us. The little white bugs who skeet across the surface that we can never catch. The bazillions of mosquitoes and sand flies that remind us of their smaller but painfully annoying existence with every bite and draw of blood. The dancing, skittling fiddler crabs en masse, who look like a big quiet something until you approach and then the whole rock or tree or patch moves in concert. The thousands of tiny fish of every kind that bounce off your feet in the low tide micro tributaries, like it’s a crowded New York subway station and you’re the idiot deciding to suddenly stop. The blue crabs, whose snapping come-at-me-bro attitude works for a time until they decide enough’s enough and that sinking into the sand and ignoring it all is probably the best approach to get through it all. Or the ineptly named horse-shoe crabs who look alien and terrifying, but are actually benign and gentle, and who we all feel sorry for later when we read that we are the aliens, because just up the coast in Charleston we humans abduct these ancient creatures, systematically drain 30% of their blood in sterilized laboratories, and toss them back as if nothing ever happened, thank you very much.

When my daughter says that we’re small what I think she means, or at least what I feel here on Sapelo, is that being on Sapelo is being just another part of life in a vast intricate system of intersecting life. In the Rockies, you are small because something is big. Here we are small because there are so many small things of which we are a part, each thing intersecting with the other in very obvious and in many less obvious ways. Every moment on Sapelo is a meeting moment because Sapelo is a meeting place of many, many things.

It’s easy to look at any beach and say that it’s an intersection, a meeting of two things, because that’s what is: water meet land. But Sapelo is even more so a meeting place. It is a physical intersection of manifold natural systems, all of them compounded upon the other. Sapelo is an important natural tributary, where salt-water animals raise and nurse their young in the moderated freshwater on the west side of the island, amongst marches that filter out the salt. 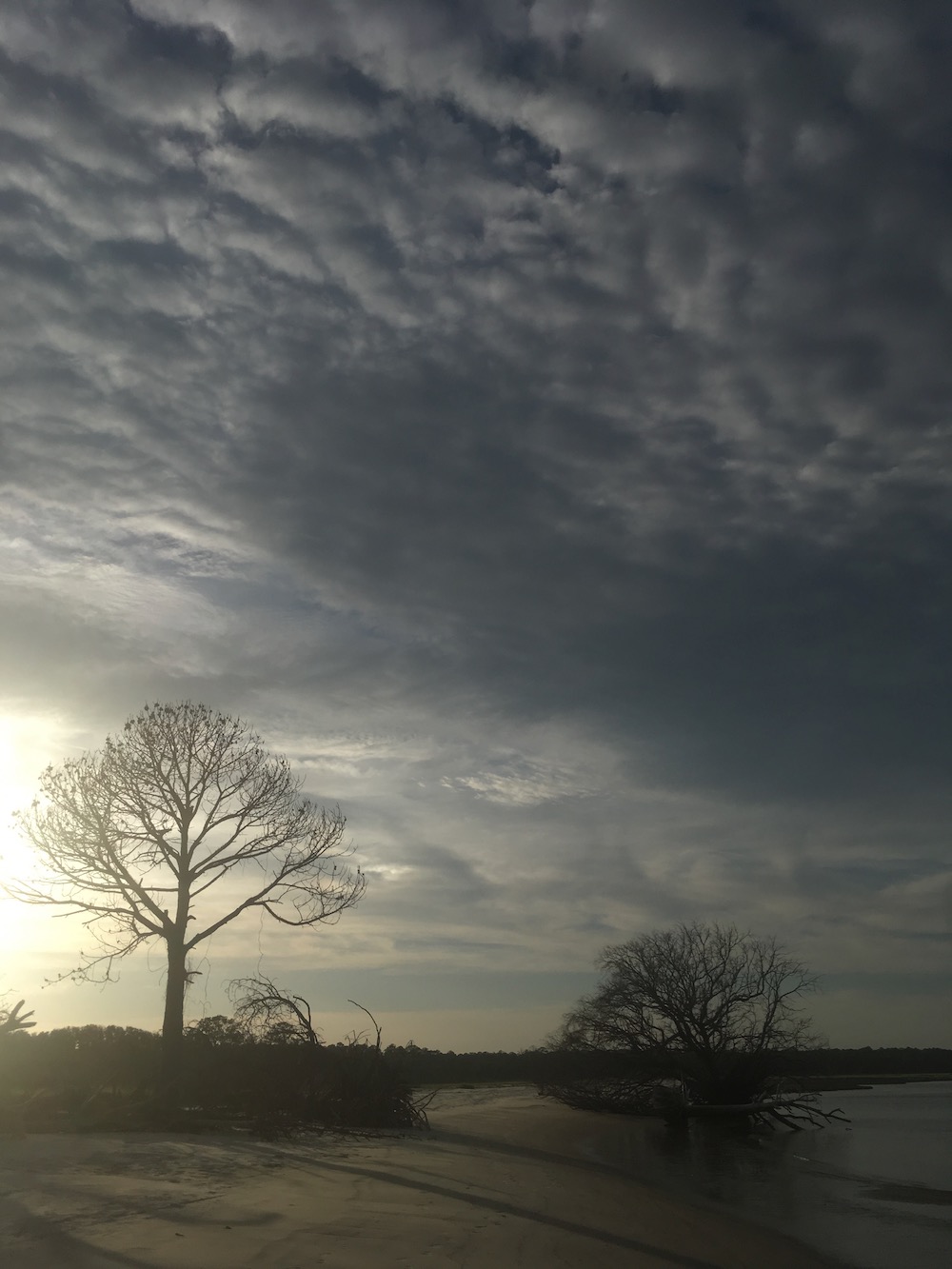 I feel helpless at Sapelo, though I don’t think much of it. But when I face into that feeling, I realize that I am only playing a role in a large system playing itself out. Everything big and small with and in a place and a direction.

Sapelo is an old island, but in the way that it has contained natural systems, it has similarly contained human natural systems. White people brought enslaved Africans to Sapelo many years ago, and while the ancestors of those white owners of human beings long since moved away, the ancestors of the enslaved remain, at least for now. But systems persist, especially in places like Sapelo, and even though slavery as an active system is gone, the system remains. There are now only some 50 ancestors still living on the island. The system of white supremacy has piece by piece deconstructed the infrastructure, education, business and homes of the ancestors of people who were forced to live on Sapelo against their will a long time ago.

And here we are on the beach, five white folk, staring at the sky, feeling small, perhaps on the same beach that those Africans set foot on hundreds of years ago, us at will, them at loss of life.

And here I am now, writing this. So, what role am I playing here, miles away in Atlanta Georgia, by writing this now? What system is at play here, now? This sounds like an existential question. It is. When I stare at the sky and the water and the land of Sapelo, I wonder what choice do I have, if only to write?

I think about the enslaved that lived on Sapelo, and their great great great grand sons and daughters who live on Sapelo now. I think about how we stopped to offer one of these grand sons a ride home. “I like riding on my bike,” he said, friendly, but I read into it as a way to say, “I don’t need you,” and I agree with him both in the moment and in my reading-into-it-ness, and we drove on.

I think about the conversation in the only store on the island where I overheard a white woman phoning her presumably white friend to tell her that land is cheap on Sapelo and there’s a property she should buy and they’d be neighbors. My wife and I even discuss how we could live here, buy a home for the summer. How easy it would be for me.

I think about the Sapelo fish fry we happened upon, and a white fisherman who was wearing a red MAGA-esque Brian Kemp hat, who kept making Trump jokes without recourse, because, I guess, he could, even though Sapelo residents rolled their eyes behind his back. There it is, built by systems, the privilege of my kind, of white men: to both tell and laugh at ones own jokes. 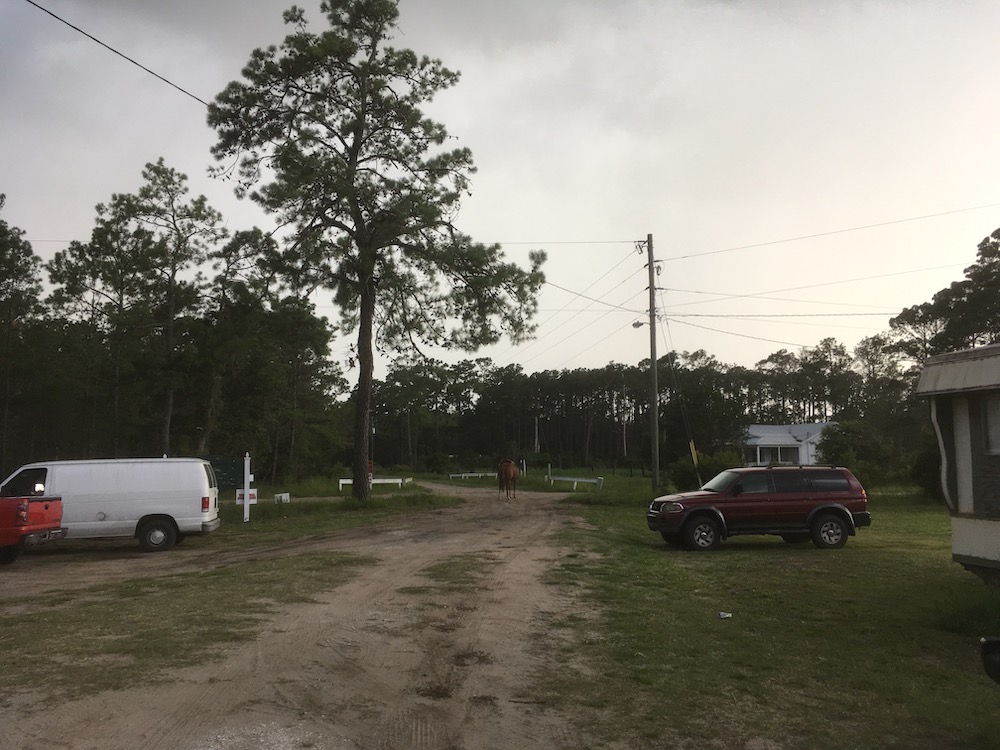 Being there felt like watching the end of an epoch. For example:

We arrived at the north beach one morning. It’s a kind ocean marsh cul de sac, teeming with life. Bursts, really. There is a pod of porpoises swimming lazily just a ways away. Fish everywhere flipping up out of the water just because. On the shores are horseshoe crabs and crabs of all kinds. Seeing and feeling all this, and being the only humans around, is a rare experience because I am almost always in a situation where humans have control of it all (or at least as much control as we can). We go walking and find some waves; something is waving back at us beyond the waves. A sting ray? A shark? A porpoise? Something else? We have no idea. It’s big. On the shore there are giant, old trees that have come up from the water. They are whitened by sun, and all of this adds to the surreality of the place. It feels like another planet. It feels sacred.

When we come back to the cul-de-sac, there are three cheap fishing boats in the water. People in the boats. Their laughs and the early-nineties rock music blaring from their marine stereos rises above the quiet, overwhelms the silence. One of the people tosses a beer can into the water. I watch the white and red can bob for a bit then take on water and sink. I think about the horse shoe crabs and the porpoises and the stingray-whatever-it-is, and the enslaved and their descendants, the systems upon systems, and I want to swim over and punch the lights out of the person that threw the can overboard.

But I don’t. I don’t punch well. Instead I judge, quietly, inwardly, as we move along the beach. I judge them. I judge myself. I am probably closest to the can-throwing-fisherman than anything else on Sapelo; everything else is foreign, to me. In fact, it’s me who is the foreigner here, the intruder, the colonizer. My feet sink into the white sand and I want my white body to follow, to disappear like a bobbing beer can taking on water.

But I go home, or to at least what we’re calling home but is actually the Airbnb on Sapelo owned by other white people. It’s a sweltering afternoon so we stay inside. The kids watch home improvement shows on satellite TV and my wife naps. I start to write this here thing, thinking does it do anything at all to change the systems, and I realize I’m just that beer can in the water, bobbing until I sink. 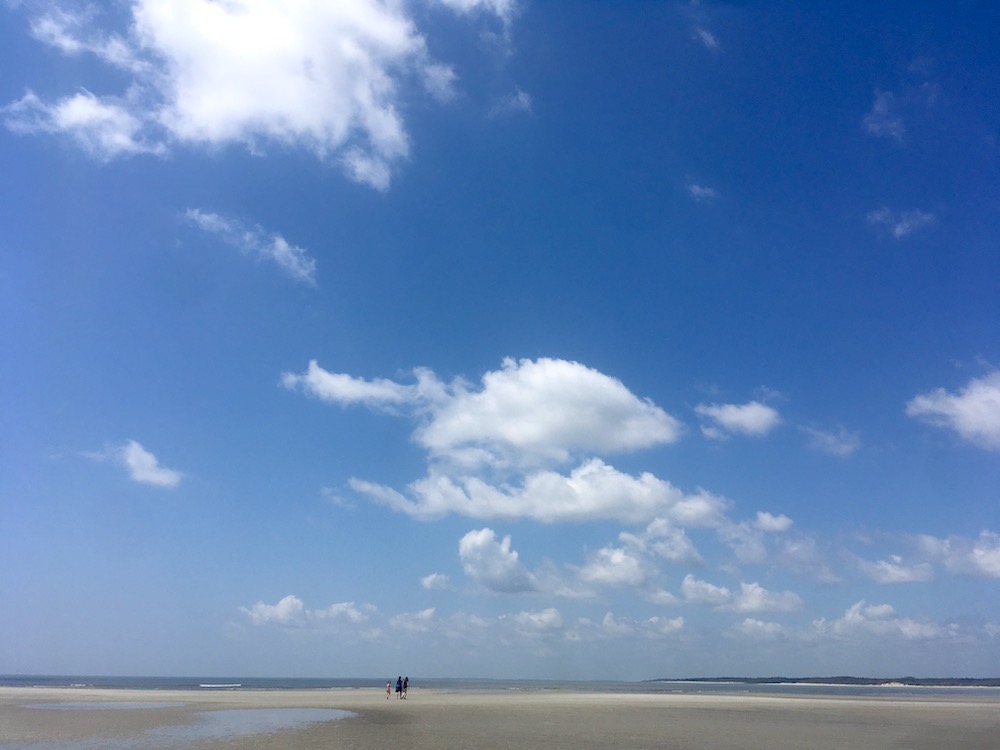